I’m intentionally not commenting here on the decision itself.  My concerns are the bigger picture.

I’m concerned that Christians could be limited in what they can, and can not believe.

I’m concerned that loving Christians will be unfairly and incorrectly labeled for what they believe.

He is calling for “a principled pluralism in which gay people can enjoy the institution of marriage and religious institutions can organize, educate and serve according to their beliefs. In a post-Obergefell world, this is an outcome many of us could welcome.”

I Hope Churches Can Choose

The Crossing Church (of Quincy, Macomb, and elsewhere) has posted a statement on their website stating their opposition to redefining marriage.  A couple quotes:

“We will reach as far as possible with the grace and love of Jesus without losing a firm stance on the foundation of God’s unshakeable truth.”

“The Church thrives counter to culture. It is the refiner’s fire where the Church is purified.”

There are many Christians and Christian churches who favor same-sex marriages.

I’ve heard that there have been gay marriages already performed in a (at least one) church in Macomb (prior to the SCOTUS ruling).

I think it is a good thing that gays will have the opportunity to marry in a church, as per the new SCOTUS ruling and that there are churches that have decided that they do not support gay marriages and will not perform them.

Here‘s an article that begins with words from Justice Kennedy’s majority decision:

Finally, it must be emphasized that religions, and those who adhere to religious doctrines, may continue to advocate with utmost, sincere conviction that, by divine precepts, same-sex marriage should not be condoned. The First Amendment ensures that religious organizations and persons are given proper protection as they seek to teach the principles that are so fulfilling and so central to their lives and faiths, and to their own deep aspirations to continue the family structure they have long revered. The same is true of those who oppose same-sex marriage for other reasons. In turn, those who believe allowing same sex marriage is proper or indeed essential, whether as a matter of religious conviction or secular belief, may engage those who disagree with their view in an open and searching debate. The Constitution, however, does not permit the State to bar same-sex couples from marriage on the same terms as accorded to couples of the opposite sex.

I like the sound of this.  It supports my main premise in this posting and  Michael Gerson’s call for a “principled pluralism.”

The author of the article goes on to claim that, over time, Christians will not be allowed to practice their beliefs against same-sex marriages (or if they do, they’ll be punished or persecuted).  I hope that this will not be the case.  Some will say I’m naive. I do see the possibility that this is a slippery slope. I hope that First Amendment rights will be maintained.

I like to take Kennedy’s words at face value.

This is a Legal Definition of Marriage

No the Name-Calling from Either Side

People are entitled to their decisions. Name calling should be avoided.  It does not accomplish anything, but is divisive. Here’s something that was posted on Facebook that is rather crude (OK, it’s Facebook), but puts it quite succinctly: 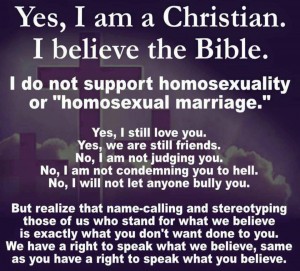 To repeat, I am neither supporting or disagreeing with the SCOTUS decision itself. My main concern is that I hope individual churches can continue to practice what they believe and not be persecuted for it.  In fact, churches on both sides of the issue need to be respected.

I’m happy for my friends who are gay because they can experience the fulfillment of marriage.