Your Grace Finds Me (Matt Redman)

The Game of Kubb (pronounced ‘koob’) is a great game for youth and adults. It’s origins are believed to be the 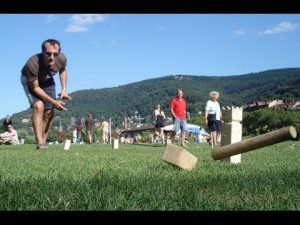 Vikings. It is fairly popular various places around the US and world. It can be played 1 v 1 or teams of about any size.

In the game, players throw (underhand required), and knock over, wooden blocks. It’s usually played outdoors, but can be played indoors–in a fellowship hall, for example with tile or carpet floor. There is strategy and skill.

The game was recommended to me by Chris at CF Youth Hope in the Quad Cities. The youth there love playing it.

Game sets (made of wood) can be purchased or made (#4H-Project).

USAkubb.org (also has a rules video) 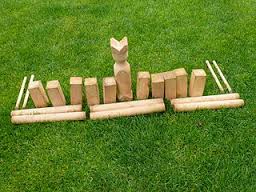 Personal Note: At the time of this initial post, I have not yet played this, so I can’t personally vouch for it. I’m pretty sure I would like it. I’m considering making a set. I think we can make the King using the table saw the same way we made the king for the backyard chess set we made for 4H a few years back.